Once graphics are taken care of, it’s time to move onto the UI, HUD, sound, and music. I’m extremely picky in this area, as you’ll soon see.

When I’m playing a game, I want the HUD and UI to be there to help me - not hinder me. What I mean by that is a bit vague, but let me try to explain anyway. For example, when I want to change what items I have equipped, I don’t want to spend ten minutes hunting through my inventory to find the item I’m looking for. SkyUI takes care of this pretty handily by including a search bar you can use to filter your inventory.

With the UI, I also want to retexture it. Because, let’s face it, the UI for Skyrim is pretty dated. Compared to more modern games like Shadow of the Tomb Raider, Horizon Zero Dawn, and so on, the Skyrim UI is… not great. There should be some stylistic choices but they should be subtle and not hinder function. Honestly I think one game that handles this very well is Call of Duty. Think what you will about those games, but they have some clean menus. Simple shapes, subtle color accents, clear indicators, and so on. Now, I don’t expect LS4 to have a Call of Duty style menu system, but that is the goal - clean lines, simple shapes, subtle accents, clear font and indicators, etc.

For the HUD, I’m looking for mods that make the vanilla HUD go away because, quite frankly, I hate it. Having to look at three separate sections of the screen to figure out what my health, magicka, and stamina are is, while technically not that big of a deal, inconvenient. I much prefer having all of my stats in one spot on the screen. A simple glance at one of the corners should tell me everything I need to know about my character. Let’s look at an example - not from LS4, but from Masterstroke. 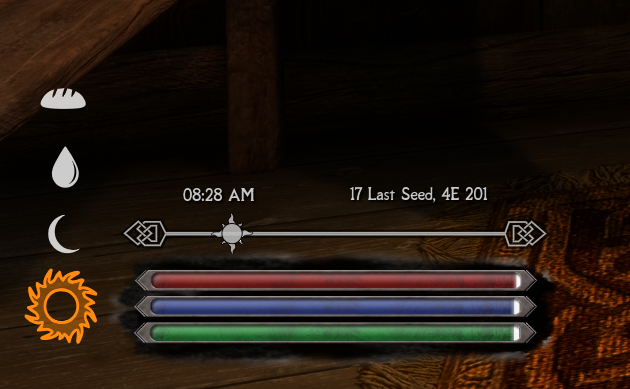 This, in my opinion, is about as perfect as the HUD can get. Everything you need to know is in one location on the screen. Except, notably, for one thing - the compass. The compass in Skyrim is a fundamental piece of navigation and actually can’t be in the lower left corner with everything else. Not because you can’t move it, but because moving it puts it in the wrong place for when you’re using it. When you’re navigating, you want to be able to be looking at both the direction you’re facing and the compass at the same time. Having the compass at the top of the screen allows you to do that.

Additionally, the only other improvement that could be made (again, in my opinion) to this HUD layout is to make it disappear when you don’t need it. There are mods that allow this to happen but getting them working perfectly together isn’t always feasible. I’m going to try and do that with LS4, but we’ll see.

I’ll be honest, I really don’t have a lot to say about this part of the list. The vanilla Skyrim music is classic and fantastic. That said, it does get old after a while. Hearing the same few combat tracks over and over and over is… boring, to say the least. So to that end LS4 will include a selection of music additions that add to the variety of the vanilla music. The vanilla music isn’t being removed, just added to.

On the other side of things, the sounds of Skyrim are less than fabulous. To that end my goal is to try and overhaul as much of the sound effects as possible. There’s one mod in particular that completely redoes a number of sound effects from creatures and has remastered voice lines to give some characters a brand new sound.

Interestingly, that mod I mentioned also replaces the UI sounds to make them clean and modern - no more “HOO-WAH” when you start a new game, but instead it’s a more fantasy-sounding jingle. You’ll see what I mean when you try the list and trust me, it’s better.

That’s it for now. Next time we’ll look at the NPC Visual Overhaul.